Blog » You Aren’t Ready for Retirement

You Aren’t Ready for Retirement

The opening line of a front page Wall Street Journal article on March 19, 2013 stated, “Workers and employers in the US are bracing for a retirement crisis, even as the stock market sits nears highs and the economy shows signs of improvement. ” Andrew Novick, Esq., CFP head of financial planning at Condor Capital, has more than 20 years of experience in the industry and says there is plenty of evidence to support this statement.

Fidelity Investments, a prominent 401k provider, regularly releases reports on the status of the 401k marketplace. They recently announced the average 401k balance hit $77,300 at the end of the 2012, an all-time high. According to Novick, this is no surprise as 401k balances tend to track the overall stock market. If the market hits an all-time time, 401k balances will follow. However, the stock market is only now above the level it was more than 10 years ago so most workers are far behind their savings goals.

Fidelity also reported that the average participant saved 8% of their pay into their 401k. For the 15th straight quarter, more participants increased their savings rate than decreased it. “It’s encouraging to see how continued savings combined with a healthy equity market have led to another record-high balance for 401k savers,” said James MacDonald, President, Workplace Investing, Fidelity Investments. However, Novick feels these statistics are somewhat misleading. The annual 401k contribution limit has risen from $11,000 a decade ago to $17,500 today. Additionally the catch-up contribution for employees age 50 or over has risen from $2,000 to $5,500 over the same time period. When the contribution limits are increased, an expected result is for the average account balances to rise. Moreover, the more highly compensated employees, who are in a financially strong enough position to maximize contributions into the plan, skew the average higher. Also, many of the more highly compensated employees tend to be more senior employees who can take advantage of the catch-up provisions, which further skews the data.

Novick suspects that many employees are contributing less and have smaller 401k balances than the “averages”, especially the younger rank-and-file workers. According to the Employee Benefit Research Institute, more than half of all workers have less than $25,000 in total savings. Here is an example: 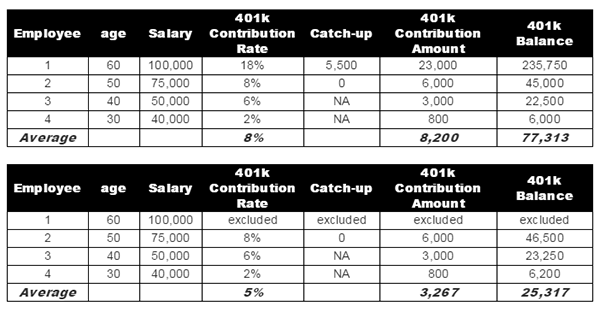 A recent study from Aon Hewitt, a global human resources consulting firm, found that 43% of employees in their 20s do not save enough to qualify for the full company match while the Vanguard Institutional Investor Group reported that workers under age 35 have the lowest 401k participation of any age group. According to Novick, “It is a shame when younger employees don’t take full advantage of the dual tax benefits of saving in their 401k plan – pre-tax savings plus tax-deferred growth. Contributing to a 401k with a company match is about the only investment opportunity where you instantly make a profit, so I just don’t understand why workers don’t contribute enough to maximize the employer match.” According to Fidelity, about 75% of employers contribute to their employee’s retirement savings – either in the form of a profit sharing contribution or a 401k match.

The compounding effect of investing makes it even more important for younger workers to start contributing to a 401k early. The illustration below shows how a 401k account balance can grow if contributions are made consistently over a long period of time. Workers need to make sure they have substantial retirement savings, so starting early is vital. 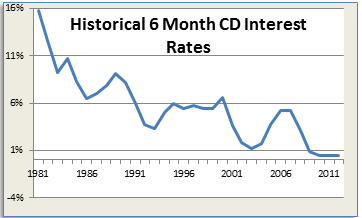 Additional problems for workers are less pension benefits and the drastic decline in interest rates. According to the Employee Benefit Research Institute, the number of workers covered by employer pension plans fell from 27% in 1981 to only 3% today. Over the same time period, the yield on a 6-month CD has fallen from a peak of nearly 16% to less than 0.5% today. The impact for upcoming retirees will be severe. They will not have much pension income and income on their investments will likely be much lower than was available to the prior generation of retirees. The longevity of the current social security system is also a serious concern. Can workers save enough to make up the difference? According to the Brookings Institute, it looks like the answer is “no”. Their findings show that those over age 65 are making the practical choice to delay retirement. In 1990, employment income only represented 18% of income for those of age 65, but this had risen to 25% by 2010. “This trend matches my observations,” says Novick, who has noticed many clients delaying retirement.

The IRS has increased the standard mileage rates for the deductible costs of operating a vehicle for business. Here... read more

What Is Earnings Season?

Every few months, you may hear the phrase “we’re entering earnings season” as you read financial news. But what... read more

With the Tax Cuts and Jobs Act of 2017 signed into law, we have focused on four changes that... read more

New Jersey is a very expensive place to live. The property, state and local taxes are among the highest... read more